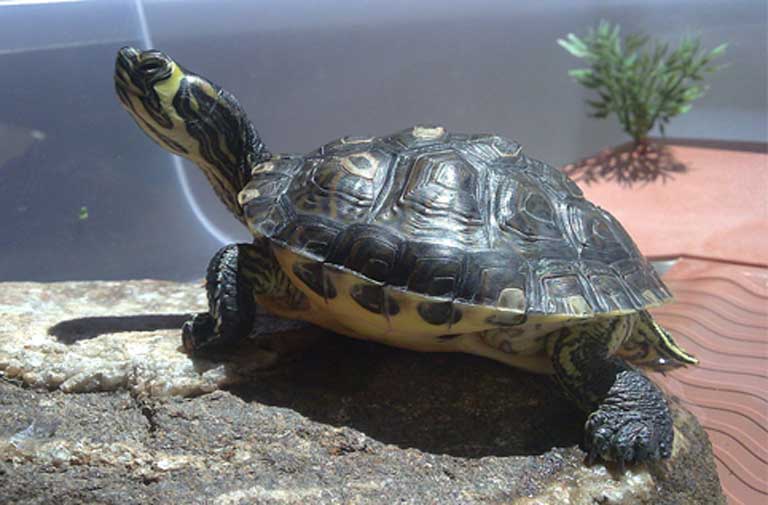 The greatest threat to the continuation of the European and Western Pond Turtle species is the human pet market. This petite native of moist environments well traversed by streams, creeks, marshes and bogs, Pond Turtles are prized for the distinct markings on their leathery bodies, bright red ear patches and smooth, ringed scutes that make up the carpace or shell. They are long-lived, with a lifespan of 30 years or more.

Optimal habitat provides gently moving waters suitable for immersion and feeding on waterborne insects, tadpoles and worms. The turtles prefer to spend their day basking in dappled sunlight while resting on large, flat rocks or logs on the water’s edge. They have been known to survive seasons of drought by coating themselves in mud puddles left behind by dissipating freshwater ponds.

Pond Turtles maintain a high degree of vigilance against approaching predators and are, therefore, difficult to find in the wild. They can hear signs of approaching visitors from 50 metres away and escape detection by diving into the water. They raise their nostrils just above the water and can hang suspended beneath the surface for hours. Determined naturalists have the best chance of discovering wild turtles by waiting quietly and patiently behind shrubs or trees at the water’s edge.

A mere 11-21 cm long at maturity, the Pond Turtle is the perfect size for the home enthusiast. They are particularly docile and their omnivorous dietary habits make them adaptable to a home diet rich in cast-offs from the household kitchen such as lettuce, berries and mushrooms. The wild turtle’s diet ranges from small fish, freshwater shrimp and carrion to algae, cattail roots and certain seed pods.

Once they reach maturity at 10 years of age, females nest once or twice each year in nests they construct in sandy soil or hardpan within 90 metres of a suitable freshwater habitat. They deposit up to 15 eggs and cover the next with excavated dirt, twigs and brush to disguise the nest from predators. A small directional opening will remain in an effort to provide hatchlings with a clue to their goal: a freshwater environment with adequate hiding places and abundant food sources. In colder northern climes the hatchlings may overwinter in the nest, existing on passing insects, grubs and worms, ultimately improving their chances of survival once they emerge from the nest.

Predators of these petite natives are many, including vermin such as minks, weasels, raccoons and skunks. Raptors and other larger bird species find them a nice meal and generally prey upon them during their daily rest periods on the waters edge. They are particularly prone to air attacks and thus seek shelter under low-hanging branches and rocky shelves.