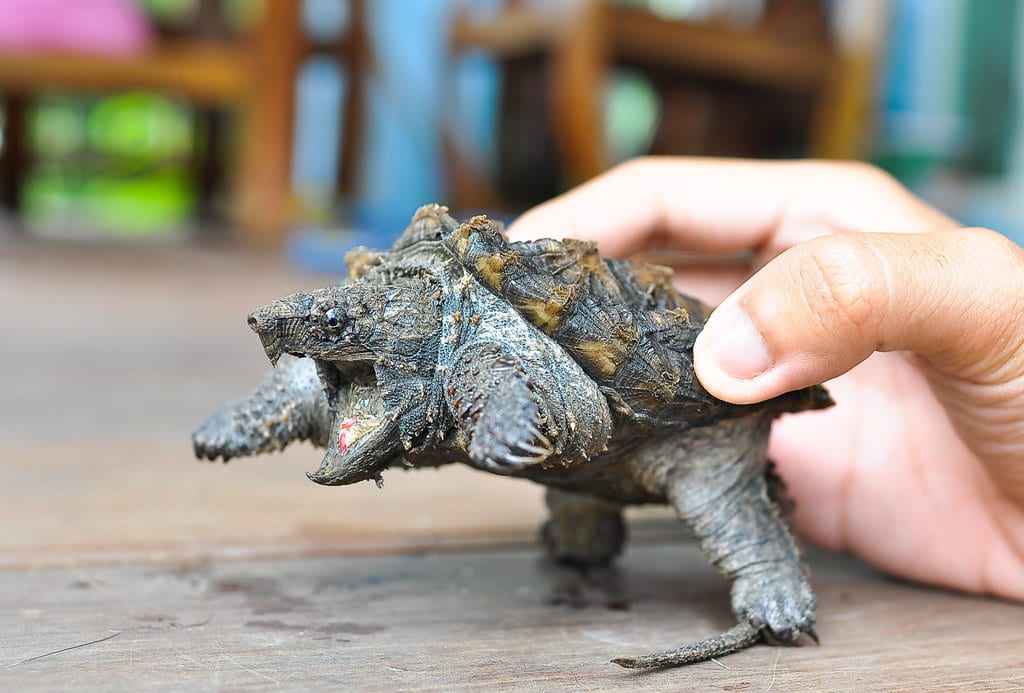 Alligator snapping turtles can be distinguished by their large head, and long tail that has three dorsal ridges. They have a vague resemblance to some of the dinosaurs. The best way to tell them apart from the common snapper turtles is by the spikes and raised plates that form three rows on their shells. Usually these turtles are gray, black, brown or olive green and they are usually algae covered. Their eyes have yellow patterns around them, which helps to keep the turtle camouflaged. They also have “eyelashes” which form a sort of star shape around their eyes.

The inside of the alligator snapping turtle’s mouth is also camouflaged and its tongue has a worm shaped appendage that it uses to lure fish. The turtle lay in the water, open its mouth very wide and then lie still for a very long time. When prey swims near it or dares to venture in, the turtle will close its mouth very quickly and forcefully, eliminating the prey’s opportunity to fight back or escape. Its bite is very strong and very aggressive. 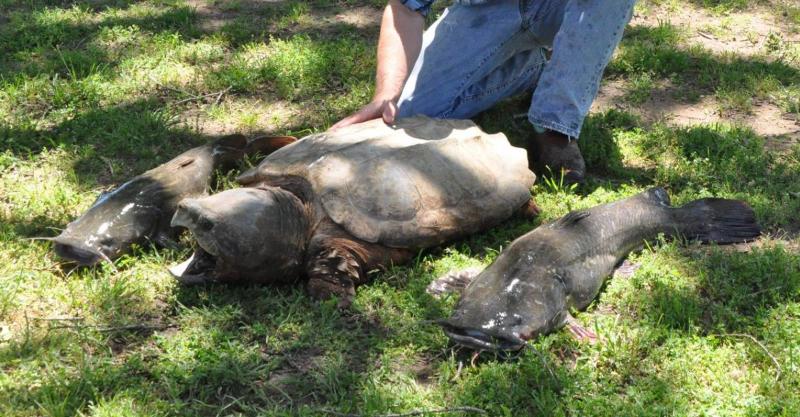 Young alligator snapping turtles are mainly carnivores, but they can also be scavengers. As they grow up, they add plants to their diet and become omnivores. When they are young, their main source of meat comes from the minnows that live around them, though they will eat whatever they can catch. As an adult they eat mainly aquatic plants, the carcasses pf dead fish, carrion, amphibians and invertebrates. Sometimes they will eat snakes or even other turtles. If they are kept in captivity they will eat whatever meat is given to them, including chicken pork, beef and rodents.

It takes twelve years for alligator snapping turtles to reach maturity. They mate during the early spring and in the southernmost part of the areas where they live. They then mate again in northern areas in later spring. The female will lay between nine and fifty two eggs about two months after she builds her nest. The temperature of the nest will determine what the sex of the baby alligator snapping turtles. Nests are usually made about fifty yards away from the edge of the water (to keep the eggs from being drowned while they are incubating). It can take between one hundred and one hundred and forty days for the eggs to hatch.