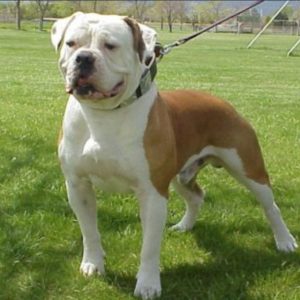 Choosing a pet is like choosing a best friend. Pets are your constant companion and pets will always be there for you when you need them. Nowadays there are a lot of animals that can be domesticated as pets. Even though animals of different kinds are being brought into homes, nothing beats the presence of a dog.

According to multiple studies done on cognitive capabilities in animals, dog’s rank 7th in the most intelligent animals. They amaze us by offering entertainment through dog shows, they aid us by guarding our homes and they help disabled individuals to lighten their burdens. One of the most well known breeds of dog is the American Bulldog.

Sub-breed of the English Bulldog

American Bulldogs are a sub-breed of the original English Bulldog. The American Bulldog is much larger than its English cousin. They have distinct characteristics that set it apart from the physical appearance of the English.

The American bulldog is a breed that is grouped with working and sporting dogs. Most of the American Bulldogs are colored mainly white with patches or discoloration of fawn, red, brindle and other colors. The breed has stout, tall, and muscularly prominent figure.

The Bully breed is larger but has a shorter muzzle than the Standard breed; nowadays many American bulldogs are a blend of the two types.

Not taking whether the breed is Standard or Bully into consideration, American Bulldogs weigh an average of 70 to 125 pounds and have a height of 20 to 28 inches when full grown.

A piece of history

After World War II American Bulldogs experienced near extinction but the aforementioned men did their part very well in preserving the breeds while working together.

Nowadays the breed is safe from being extinct. They are even enjoying prestige in the different fields either as a working/security dog, or as a family pet or sporting dog.

This breed of dog is very easy to train, not hostile and has a gentle demeanor. They work for different purposes all over the world – they act as hog dogs, as working or sport K-9’s, and even as cattle drivers.

This breed had not only flourished in the field of dog sports but they are also able to shine even in the showbiz industry.

They are also commonly associated as mascots because of their pride, devotion, and bravery when working. They make wonderful family pets and could be the perfect addition to yours with the proper training and exercise.