You are here: Home / Blog / What Do Squirrels Eat?

What do flying squirrels eat ? 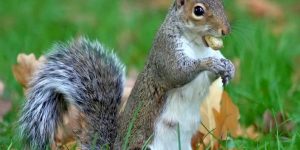 Flying squirrels feed on a variety of plant and animal matter. Many of the larger tropical species are mainly herbivorous some specializing on the feeding of young shoots and fruits. The temperate species tend to feed largely upon tree seeds, some fruits and fungi, and animal matter.

Smaller tropical species tend to be much more carnivorous, feeding upon insects, spiders, and even small vertebrates. The montane woolly flying squirrel feeds upon mosses and lichens on rocks and conifer needles.

They are known to glide large distances to particular trees in order to feed on seasonal fruits or tender growing leaves. Some species show considerable seasonal variation within their diet, exploiting food resources as they become available.

What do Southern flying squirrel eat?

What do Siberian flying squirrel eat?

What do ground squirrels eat?

However, fungi, berries, shrub, and tree buds are important items in the diet of many species. Several species will raid bird’s nests for eggs or chicks, and kill and eat small mammals, amphibians, and reptiles. Insects are a small supplement for many species but the Nelson’s antelope squirrel will eat primarily insects during the dry season.

Many of the hibernating species, such as Spermophilus and Marmota, forage intensively during the summer to store fat, sometimes doubling their mass before entering hibernation. Chipmunks hibernate, but most tend not to store fat; instead they cache nuts and seeds that they will access periodically throughout the winter.

What do Arctic ground squirrel eat?

Eats mainly forbs with a preference for legumes. Will prey upon lemmings (Dicrostonyx torquatus), newborn snowshoe hares (Lepus americanus), and birds’ nests. Will consume insects and carrion. Males collect and cache seeds below ground for access during early spring.

What do European ground squirrel eat?

Primarily grasses and other herbs.

What do Harris’s antelope squirrel eat?

Feeds on fruit, seeds, and fleshy parts of cacti, and seeds of shrubs. Seeds are transported in cheek pouches to burrows for consuming when environmental conditions are poor.

What do Columbian ground squirrel eat?

Polygymous. Consume a variety of forbs and grasses with preference for forbs. Will consume invertebrates and carrion. Males will cache seeds in the fall for consumption in early spring.

What do Idaho ground squirrel eat?

Preferences for herbaceous leaves, flowers, bulbs and grasses. Diet shifts towards seeds later in the season. Will eat invertebrates and fungi.

What do tree squirrels  eat?

Fruit, leaves, and bark are important in the diet of tropical giant squirrels, whereas nuts as well as conifer and deciduous tree seeds are a significant component of North American and European squirrels.

A large variety of other food items are also consumed including fungi, berries, buds, shoots, tree sap, and insects. Anecdotal evidence also indicates that some species may opportunistically prey on bird eggs in nests. Squirrels are also known to satisfy their calcium demands by gnawing bones.

Squirrels, like many birds, hide food items to consume them at a later time. Two main strategies have been observed: scatter hoarding in which one or several items are cached at different locations throughout the squirrels territory or home range and larder hoarding in which a large amount of food is  stored in one or a small number of sites.

Caching is thought to be an adaptive strategy and food stores are important in periods of adverse weather conditions and low natural food availability. Its intensity varies with habitat type and the behavior has been linked to increased survival and reproductive success.

The “stealing” of European red squirrel, Sciurus vulgaris, caches by the larger introduced gray squirrel, S. carolinensis, has been suggested as a factor contributing to the decline of the native red squirrel in Italy by Wauters and others in 2002.

What do Red squirrel eat?

What do Gray squirrel eat?

Gray squirrels feed predominantly on nuts as well as tree seeds of both deciduous and coniferous species. Other food items include, flowers, buds, fungi, and fruit.

Gray squirrels hoard seeds such as acorns. The squirrels may react to a chemical cue in the shell of the acorns and caching decisions were found to be based on perishability with longer lived items being cached rather than consumed.

In addition, gray squirrels increase the longevity of their food stores by preventing germination through embryo excision. This is particularly the case for white oak (Quercus alba) acorns.

What do Abert squirrel eat?

Ponderosa pine seeds, bark, buds, and flowers. Other food items include insects, acorns, mistletoe berries, and fungi. Fungi are an important food source in the summer and Abert squirrels may be important spore dispersal agents.

What do Eastern fox squirrel eat?

Tree seeds and nuts as well as buds and flowers of trees.

What do Arizona gray squirrel eat?

What do Peters’s squirrel eat?

Known to feed on acorns, almonds, and wild figs.

What do Variegated squirrel eat?

Fruits, nuts, seeds of hard shelled fruits, and fungi. Main components of an observed diet included the seeds of guacimo, mango, and hogplum.

Main diet are conifer and deciduous tree seeds and fungi. Other items include tree buds, flowers and sap, bark and insects.

The species larder hoards cones in a central cache site (midden) that typically mark the center of the territory. Scatterhoarding of cones has also been observed. Whitebark pine cones are an important food of grizzly bears in Yellowstone and they are know to excavate red squirrel middens.

What do Pallas’s squirrel eat?